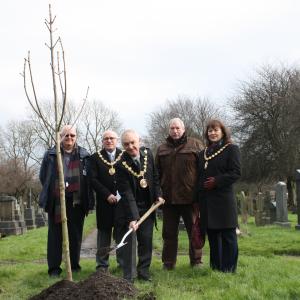 Unveiled by the Ceremonial Mayor of Salford, nine new trees were planted in Salford’s oldest Cemetery, including those chosen in a public vote.

In November last year members of the public were asked to vote for which tree they would like to see planted in two prominent locations at Weaste Cemetery, the oldest of Salford’s four cemeteries, opening in 1857.

The public chose from three species of tree shortlisted with the Friends of Weaste Cemetery; a weeping beech, weeping willow and an Indian horse chestnut, with the latter coming out on top.

The initiative forms part of ‘Heritage Trees’, a project by charity Red Rose Forest, which aims to create an online record of Greater Manchester’s tree heritage made up of people’s stories, memories and photos.

The Ceremonial Mayor, Cllr Peter Dobbs, was on hand to unveil the nine newly planted trees on Friday 12 February 2016, with the two Indian horse chestnuts, which can grow up to 30m tall and produce over 300 flowers, planted on the grassed roundabouts.

Lucy Holland, Heritage Trees engagement officer at Red Rose Forest comments; “These trees are a welcome addition to the Cemetery. Many of the existing trees were reaching the end of their lives, and a number had come down in the recent high winds.

“This new planting aims to redress the balance of trees in the Cemetery and help bring it back to its Victorian glory days. The Heritage Trees project isn’t just about celebrating our past – it’s about creating the heritage trees of the future”.

As well as the tree planting, children from  Willow Tree Primary School took part in a ghoulish Goblin Walk to learn about the Cemetery’s long history.

Red Rose Forest is also part of a new movement – Manchester City of Trees. Spearheaded by a number of committed partners it aims to plant three million trees in the next two decades – one for each man, woman and children in Greater Manchester.