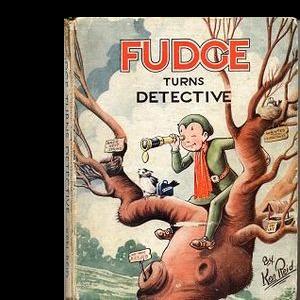 This National Tree Week (25th November - 3rd December) City of Trees are celebrating the iconic trees round Greater Manchester through a series of interpretation panels which tell their stories.

One of these is the Fudge Tree in Lightoaks Park, Salford, with the story as follows:

Wandering around the park in the 1930’s, looking for inspiration for his surreal tales was local cartoonist Ken Reid. He happened upon a strange misshapen stump and it gave him the idea for the Tree King in the story Fudge in Bubbleville . This stump was the remnants of a cherry tree and it quickly became known locally as the Fudge Tree.

Fudge started out as Budge, the budgerigar, but Reid struggled drawing birds so he became an elf. Fudge’s adventures with elf friend Speck delighted readers who followed their mischief into magical worlds like the underwater land of Bubbleville, up to the moon in a silver sixpence rocket and into battle with the mighty Black Dragon of Cragg Valley.

The daring duo were popular chaps, so much so they appeared in the Manchester Evening News every week (save for a pause during World War II, when Reid was in active service), and had their own books, annuals and even dolls!

The pages that brought Fudge to life are now very hard to find but you can learn more about his fantasy world at www.fudge-the-elf.com

As part of the Heritage Trees project more interpretation panels are planned, as well as important tree works and collecting stories which are celebrating our local tree heritage. Leave your own tree story today.