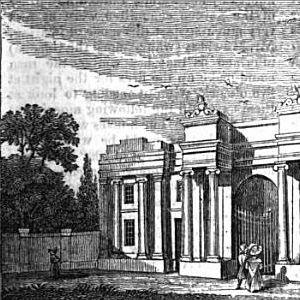 By Trianna Angele, City of Trees.

If you have ever taken a trip past Manchester United’s football ground or driven between Salford and Old Trafford along Chester Road you may well have seen a striking white archway – seemingly a gateway to nowhere.

The name of these two areas is the only noticeable legacy of this remarkable area. However this well-used retail park hides a rich and fertile history which lies just beneath the concrete car park.

Some 186 years ago the large striking white columns that stood either side of the gateway guided people of the city into what was originally Manchester’s very own Royal Botanical Gardens.

The history of these gardens is a curious and turbulent one. Beginning in 1827 during a meeting at the Old Manchester Town Hall, the Manchester Botanical and Horticultural Society was founded. A committee was selected from associates of small local botanical groups whose job was to gather members who would pay an annual fee and from this they would buy plants and build glasshouses and large flower beds.

They aimed to create a garden that would not only be used for the study of botany but also to provide the citizens of Manchester with a place for recreation and access to clean air. They bought 12acres of farmland on the very border of the city from Mr. T. J. Trafford who offered it at a bargain price to kick start the gardens.

The industrial nature of the city during the 19th Century meant pollution was widespread and with the recent end of the Napoleonic Wars in the early 1800s, unemployment was high and economic conditions were poor. People were frustrated, political unrest was common and the Botanical Gardens were seen as a way to address many social of the problems at the time whilst providing a place for people to escape the harshness of daily life.

"What can be a more delightful relaxation to a Lancashire Mechanic than an hour or two in a garden; what an escape from the pestiferous politics of the times" - Extract from the minutes from The Archive of the Royal Botanical and Horticultural Society of Manchester and the Northern Counties.

The gardens increased employment too as large workforces were needed to build the huge surrounding brick walls, including making and firing the bricks on site, and the vast planting areas. The committee also created apprenticeships to recruit young people to train under the gardeners.

The next step for the committee was to source trees and flowers, which for many botanical gardens would have come as gifts and donations from different horticultural societies. The Duke of Bedford made the first donation of various willow trees in 1830. This was followed by numerous flowers, cuttings and a vast array of seeds from both national and international donors.

No detailed drawings of the garden plans survive, but it is known that a large variety of plants, in particular a spectacular range of trees, were planted. These created orchards for the fruit garden, the arboretum, and individual specimens within the lawns. The committee minutes of December 1830 detail that the London Horticultural Society donated the following trees for the fruit gardens: 40 apples of different species, 13 pears, 3 plums and 4 cherry trees, with a pledge to send cuttings of a further 30 apples, 14 peaches, 19 pears, 5 plums, 5 nectarines, 4 cherries and 6 apricots in the spring when the weather was suitable. Nowhere in the North of England could such a huge array of exotic fruits be found before this.

An order to Caldwell’s Nursery of Knutsford, by the committee, from February 1831 survives today, and details that 622 trees, both deciduous and evergreen were to be planted in the gardens prior to opening.

The official opening took place in June 1831, a truly grand event unveiling striking buildings and walled gardens, beautiful displays of flowers, plants and trees that many people would never have seen before.

Due to lengthy decision making and different opinions within the Botanical Society committee only the outer wings of the impressive focal glass house for exotic plants was complete for the opening. The impressive 35ft high central glass dome was missing, as construction ran behind schedule.

The gardens were the talk of Manchester and people came from all over to visit. Many historians and researchers have been unable to find illustrations or photos of the large glass houses and gardens from this time. However a postcard showing the inside one of the great glass houses, collected by Ann Brooks, author and researcher of Manchester’s Botanical Garden, survives today. The committee continued for many decades to push for the very best and highly regarded plants for the gardens creating a true oasis within the City of Manchester.

A huge scope of trees from both Britain and abroad continued to be sent to the Gardens, including in 1951 11 species of Hawthorn, Bosnian Maple (Acer Obtusatum) and an African Tamarind (Tamarindus Indica) ensuring the Gardens remained at the pinnacle of horticulture. However the housing and maintenance of such plants continued to create a lot of over-spend and debt.

During the mid-1800s there was a movement of the upper middle-class out of the city into the countryside which affected the number of paying subscribers who were the financial backbone of the Gardens.

So, in 1856 an Art-Treasures Exhibitions was held to bring the Botanical Gardens back into the public eye and raise much needed funds, even Queen Victoria was invited to attend. Magnificent towering glass buildings were built to house paintings, sculpture displays and even more exotic plants. A big disagreement took place between the committee and the director of the catering, Mr Donald, over having temporary tents. This led to a quick exit of all Mr Donald’s staff and the refreshments. The tickets for the event were for one entrance only, so when people left to get food they did not return.

This was a disaster for the Gardens resulting in the committee falling into financial trouble. Then in 1857 the curator of the gardens for 25 years, Mr Cambell, was charged with ‘gross ignorance and mismanagement’ and asked to leave. Mr Cambell fought back and proved that the committee, not himself, had ordered pruning at the wrong time of year, damaging many trees and plants in the gardens.

Mr. Bruce Findley became the new Curator in 1858, and a new larger committee was elected. Findleys motto was was ‘A garden is health, a garden is wealth, a garden is happiness’. His dedication and debt management meant the gardens were back on track by 1865.

For many decades Manchester’s Botanical Gardens flourished and great international flower exhibitions and many prestigious shows including car exhibitions were held there.

In 1896 Findley past away while at the Gardens and by the end of that year the committee decided to clear all underlying debts by handing the land deeds over to the bank. During this time neighbouring land was bought by local businesses, factories built, visitor numbers dwindled and people were worried for the gardens.

Stretford District Council offered to buy and pay for the management of the gardens but the committee would not allow free access to Stretford residents so the deal was called off.

In 1907 the debt was too much and the bank needed paying so the decision was made to lease all the Botanical Gardens to John Calvin Brown of Heathcote and Brown Ltd, who then founded the company ‘The White City, Manchester’. This name was added to the top of the white Gateway we see today.

By 1908 he had already begun to reinvent the gardens and attract people back. He applied to Trafford Council to build miniature train rides and as the years past further additions were added; ice skating rinks, water chutes, individual performance stands, larger band stands and a small zoo. Many plants and glass houses still remained as stunning features within the amusement park.

John Calvin Brown dedicated a lot of time to creating a place of national importance for entertainment from dog shows to innovative buildings for entertainment. He commissioned architects such as Basil and Vivian Pendleton to build grand constructions for example a 75 foot Tower Swing and a Joy Wheel. The fate of the Botanical gardens was always tied into its finances and in 1912 The White City Ltd Company went bankrupt and left the site.

The 1st World War begun in 1914 and the Botanical committee held the last ever exhibition in 1916 ‘The garden in Wartime’.

The committee had worked tirelessly though many decades of financial hardship to give the people of Manchester a true escape from the smog and grime of the industrial revolution and provided jobs, education and a place to enjoy life. However in 1927 they sold the land, which subsequently became a Greyhound racing track until 1982.

Manchester was once home to one of just three Royal Botanical Gardens in the UK - with the other two still remaining; Kew in London and Inver Leith in Edinburgh – a truly lost legacy to the city, it’s people and visitors.