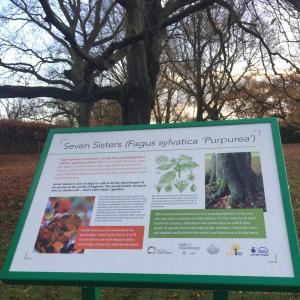 This National Tree Week (25th November - 3rd December) City of Trees are celebrating the iconic trees round Greater Manchester through a series of interpretation panels which tell their stories.

One of these is the Seven Sisters. This mighty copper or purple beech tree towers over Flixton Park in Manchester and is so called because it is seven beeches, which have grown together into one huge tree. It is now so big it is said to be the third largest of its species in the north of England

The purple beech can grow over 40 metres tall – that’s taller than 7 giraffes, and coppiced it can live for 1000 years

This process of separate trees morphing into one is called inosculation, it is when trees rub together and over time eventually blend into the same one.

As part of the Heritage Trees project more interpretation panels are planned, as well as important tree works and collecting stories which are celebrating our local tree heritage. Leave your own tree story today.